Whether you are closely influenced by the financial markets or not, this article will bring chills down your spine after knowing what’s going on.

The Global markets are bleeding red. Reports state around $11 trillion loss in the markets.

The S&P 500 is down by a massive 19%. NASDAQ, popular for its tech-heavy stocks, faced even more wrath as it plummeted by over 28%.

The crypto markets fell like rainfall and went down by more than 50%. Luna(A cryptocurrency project) fell by more than 99%.

Yes, this is what’s going on in the world, and believe it, or not the implications of this crash will affect you heavily.

I will try to break down this current market scenario, its similarity with the past Global recession, and how you can beat it with the best practices.

So, let’s jump into it and see why did such a crash come in the first place?

Why Are The Global Markets Down?

There is not a single reason that brought such a huge selling pressure globally. With many events going on throughout the world at the same time, the markets had to go down someday.

But here are some of the reasons that led to the bloodbath of the financial markets.

1. The Inflation Spike In the U.S

The fear of rising inflation was clearly visible for some time in the U.S, and it finally happened. The Consumer price index(CPI) is the method of measuring the rate of change in the price of commodities and services over a period of time.

The prices of the goods and services have skyrocketed and the CPI reading for the month of April boosted by 8.3% annually, a level that the American consumers have seen for the first time since the 1980s.

This alarming rise in inflation can continue to harm the markets if it is not matched with higher wages. It has even influenced the companies as their expenses have risen tremendously.

Although the earning capacity has risen, the profit margins are getting slashed, and thus, it is affecting the markets directly. All this is directly hurting the confidence of the consumers, which is being reflected in the shares of the public companies.

The global markets had started rallying for newer highs after getting a hold of the pandemic when Putin decided to mess everything again. The Russian invasion of Ukraine turned out to be a key event in the fall of the major financial markets.

Russia imports around 10% of the world’s oil, and the war brought in many irregularities in the trade. As the European Union and the U.S put a ban on the Russian oil imports, the businesses started spending more on transport as the oil prices soared to all-time-highs.

This created a steep fall in the growth expectations and the earnings forecasts, resulting in falling stock prices.

3. Feds Action On The Interest Rates

The Federal Reserve of the United States brought in several norms to tackle the alarming inflation in the country. To maintain 2% inflation for the future times, the feds raised the interest rates by 0.5%. This is the biggest interest rate hike since 2000, and the outcome is clearly visible.

Although the interest rates are not meant to push down the stock market, it does harm equities.

As the interest rates increase, companies tend to spend less, which eventually causes a decline in the pace of the economy’s growth. Thus, it affects the stock prices directly.

The COVID-19 pandemic damaged the global economy, and its impact is still very prominent. The supply chains also got heavily affected due to the pandemic and the following global lockdown.

Giant companies suffered a shortage of products as the production took a halt. This resulted in an inadequate supply of products to fulfill the customer’s needs and demands.

All of this decreased the profit of the company and resulted in a fall in its stock prices.

China is the world’s second-largest economy and the country with the cheapest labor. Many big companies like Apple and Tesla have set up their manufacturing units in the country.

This is the question that is haunting every investor right now. I did find some really interesting facts to back this statement, and this is what I found out.

Similar to the dot com bubble, when every company that added “.com” to its name saw overnight success, things happened exactly the same with cryptocurrencies and DeFi.

As it is famously said that history does not repeat three or four, but it rhymes. This is what’s been going on recently. 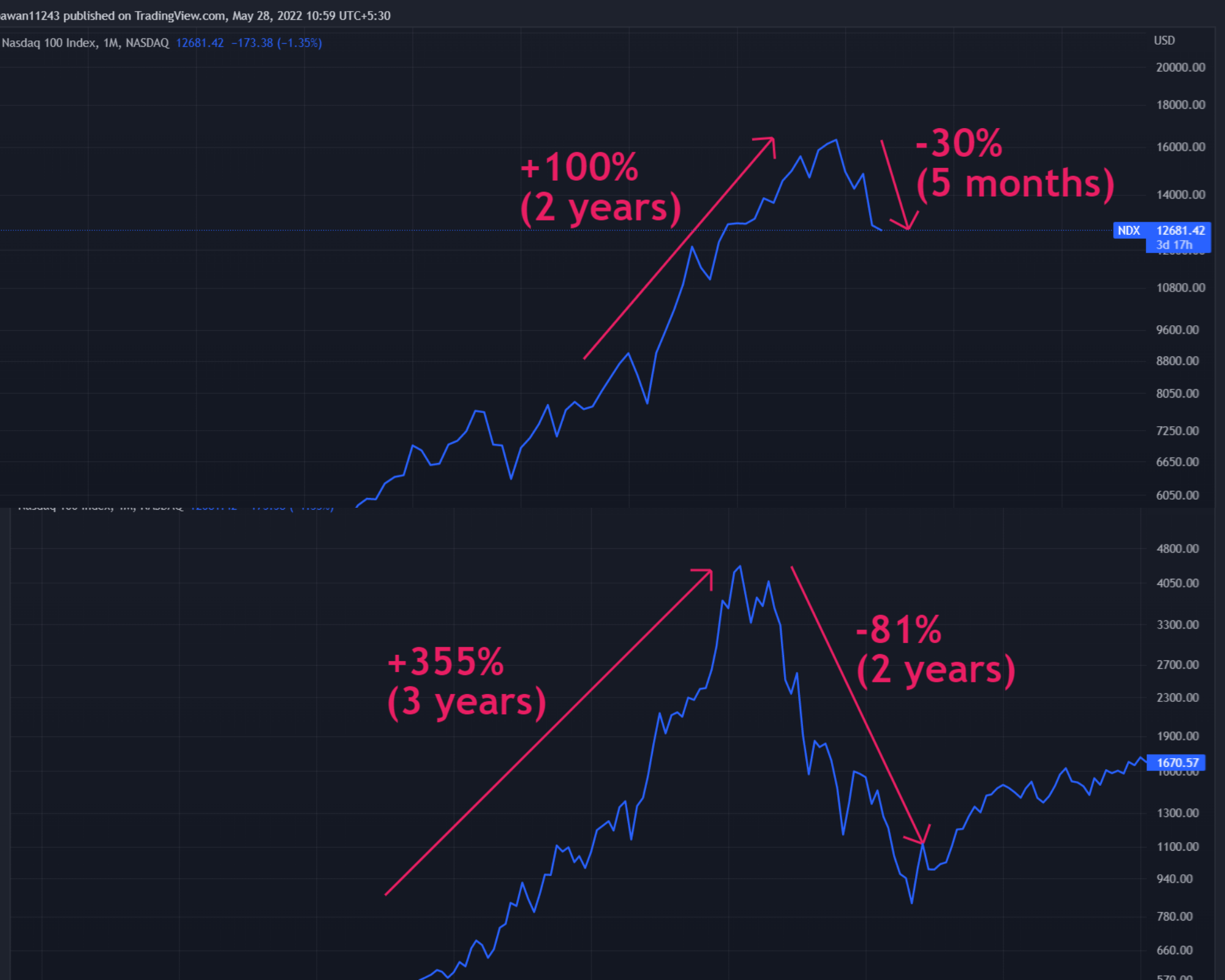 Market corrections are not something rare, but a massive dump in a short time is not something happening every morning. The 2000 crash witnessed a crash of more than 80%, which brought the NASDAQ back to the levels of 1996.

Similarly, the post-COVID-19 boost saw a massive bull run in the market, but as the correction began four and various negative factors hit the world, it seems to be utilizing all the pumps as NASDAQ is down 30% in a matter of months. 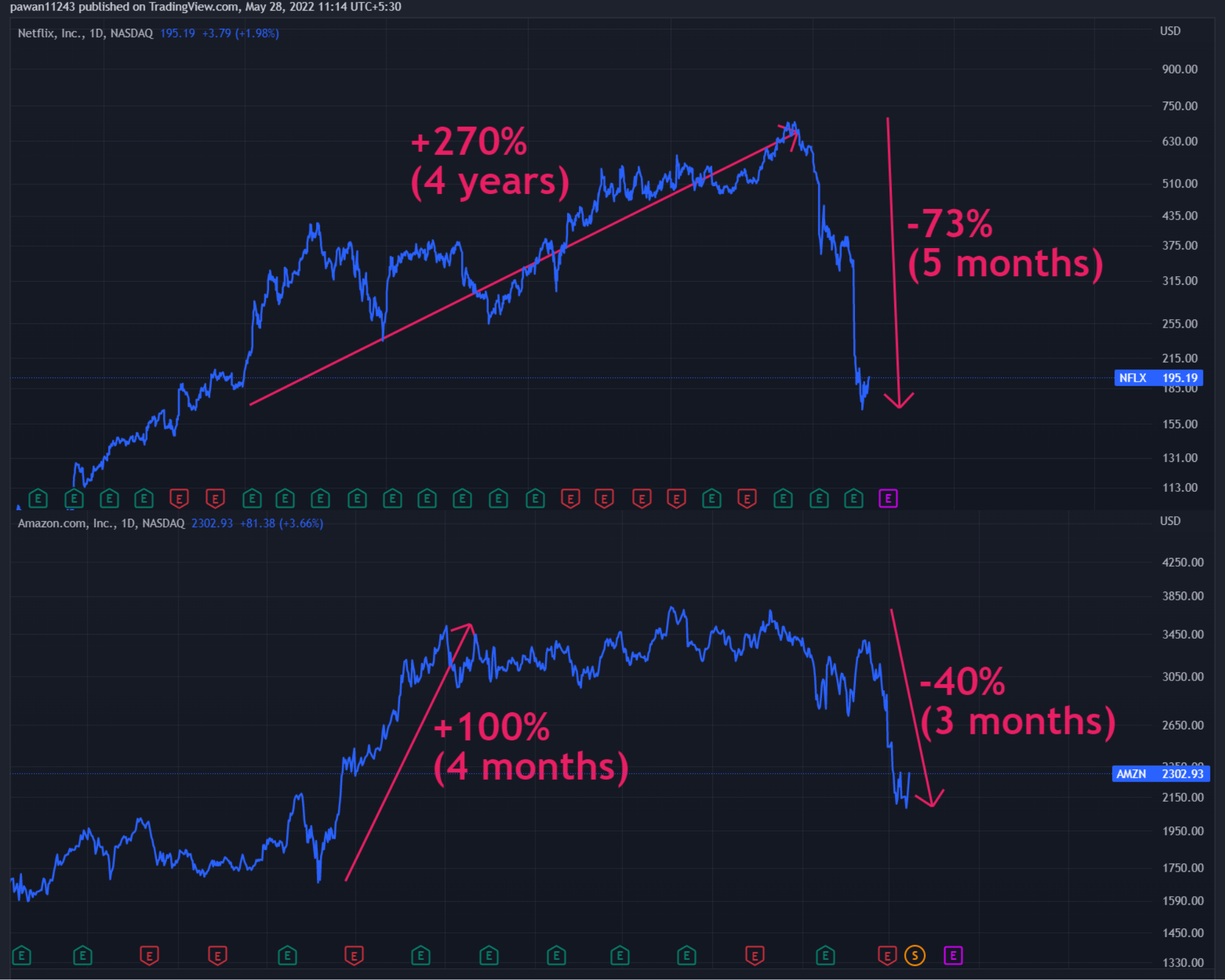 Just like the Dotcom times, as the Covid-19 pandemic slowed down, tech giants like Amazon and Netflix ramped up their productions. With hefty investments to meet the customer needs and demands, all the tech companies seem to have overspent and over hired.

The result is clearly visible on the charts below.

As Netflix reported, its subscriber loss for the first time, and Amazon continues to face legal notices across the globe, they seem to be absorbing all the boom they made in the post-covid boost.

Amazon, which had doubled its worth in a mere four months, is down by 40% in just three months. Whereas Netflix, which had been in a dream bull run for years, took a dive in the pool with a 73% crash in 5 months.

The reason is undoubtedly the over hiring and the losses of the companies that followed. This situation exactly replicates the dot com bubble.

However, even with some similarities, the current scenario does not exactly resemble a bubble. Undoubtedly, some companies are overvalued, but they are priced close to their reasonable price as they show a lot of growth potential.

If you compared them with their peers in 2000, then they are far better placed. The steep correction has brought all the tech giants on alert as they continue to research and develop for their benefit. It is very clear that they are well aware of their past mistakes, and this time they will make sure that they do not fall into pieces.

What’s Next For The Markets?

No one can time the markets. There is a lot that is at stake while you try to predict its next move. However, it is better to be safe than to take more risks.

The current situation proves that the worst is unfortunately not over. With the Russian invasion still on the move, the global markets continue to fear. The Feds have indicated that inflation is here to stay, and the economy needs some time to breathe.

The tech companies are also suffering a massive shortage of products and services due to China’s halt. All these situations show that the markets can still go further down.

But, how do you invest your money in the markets in such conditions?

Or should you sell your existing portfolio at a loss?

Don’t worry. The next section tells you just what can be the best decision in such situations.

There is a lot of speculation about the current market situation. However, making some smart moves can make you some handsome money.

1. Choose Stocks On Their Earning Capacity

The time when investing in anything that was pumping and making quick gains is over now. Making money in a bull run is far easier than surviving in a bear market.

Try to invest in those companies that have a good earning capacity. When a bigger sell-off hits the markets, these will be the companies holding strong in adverse conditions.

Yes, Dividends are the new source of income for many people. It is quite obvious that dividend-paying stocks are not much affected by flash crashes that occur in the markets. This is because of their strong fundamentals.

3. Do Not Try To Time The Market

If you are getting greedy with the fallen stock prices, and want to catch the bottom, then you can be a part of the 99% of people who lose money in the markets. Instead of catching the bottom, it is safer to put your money when the stocks are bouncing back and start showing signs of growth.

This is the time when you diversify your portfolio for safer investments if you are not at a loss. Consider investing in SIPs, mutual funds, and bonds. These are the least volatile investments in such market movements.

5. The Best Thing To Do Is Doing Nothing

Sometimes, doing nothing can do wonders, and in the stock markets, it is even more prominent. If your portfolio is not down, then you can consider taking a break from the financial markets.

Such flash crashes and dumps are indeed unusual, and predictions fail every day in these conditions. So, it’s better to wait for the markets to settle than to get greedy and lose your investments. Vested vs Scripbox: Which One’s Better To Invest In U.S Stocks? 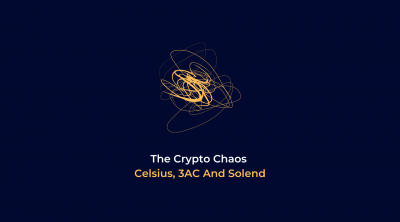 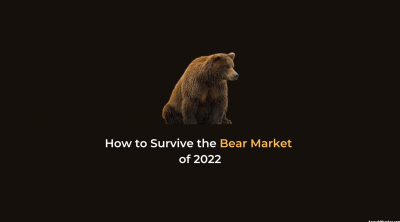 What Is Payment For Order Flow (PFOF)?