20 Best Finance Documentaries to Watch in 2023

Why do businesses fall? What are the dark practices followed by companies to remain at the top of their game?

Today, I will share the top 20 finance documentaries/movies that will answer these questions by venturing into the not-so-cool side of major businesses and economies.

Let’s dive into it!

The documentary reveals the life and investing journey of the world’s greatest investor, Warren Buffett.

The makers interview Buffett discussing his life journey and how he learned the principles of value investing through his mentors and colleagues. The film also interviews his business partners and family members.

You can watch the movie on HBO and Disney+Hotstar.

The Inventor: Out for Blood in Silicon Valley (2019) Released in 2019, The Inventor is based on the life of Elizabeth Holmes and her startup Theranos. It highlights how she defrauded and convinced investors to invest in her idea that promised to revolutionize blood testing.

She became the youngest self-made billionaire in the world. However, within 2 years, the company went to ashes.

You can watch the documentary on Disney+Hotstar and HBO. Narrated by Matt Damon, Inside Job covers the socio-economic ramifications of the 2008 financial crisis in the US and around the world.

Divided into 5 parts, it focuses on the role of big businesses and corruption within the financial system in the eventual fallout and how they flounder the liability for their illegal practices. It further shows the power of these MNCs to lobby the US government and avoid the penalty.

You can watch the documentary on Amazon Prime, YouTube, and Apple TV. 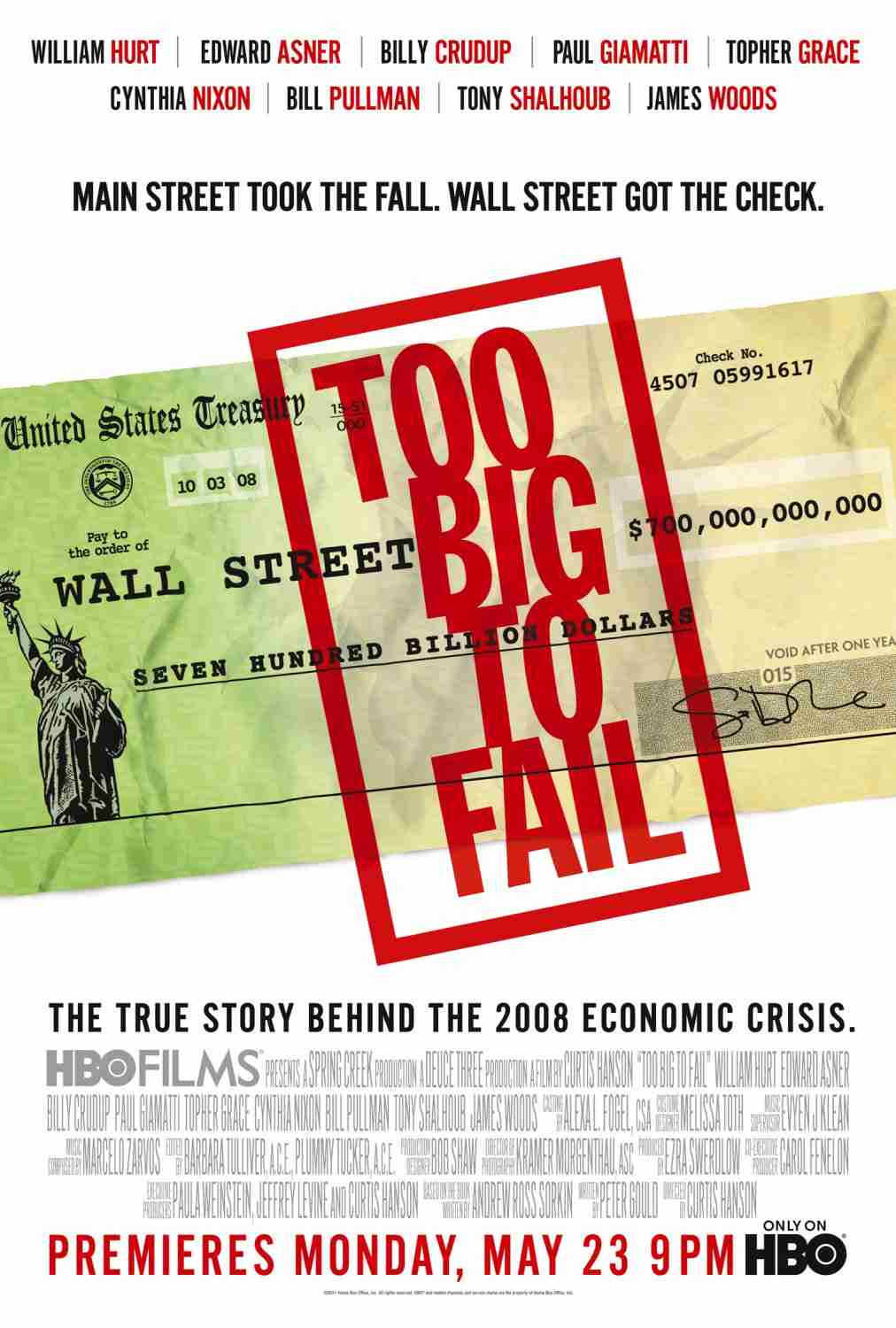 Directed by Curtis Hanson, the movie is based on the non-fiction book by Andrew Ross Sorkin in 2009, “Too Big to Fail: The Inside Story of How Wall Street and Washington Fought to Save the Financial System—and Themselves.”

The movie shows the aftermath of the 2008 financial crisis from the US government’s lens and highlights the action taken by the former US Secretary of Treasury, Henry Paulson. He took a controversial decision to save the top 10 financial institutions, which were partly responsible for the 2008 global economic meltdown.

You can watch the documentary on Disney+Hotstar. 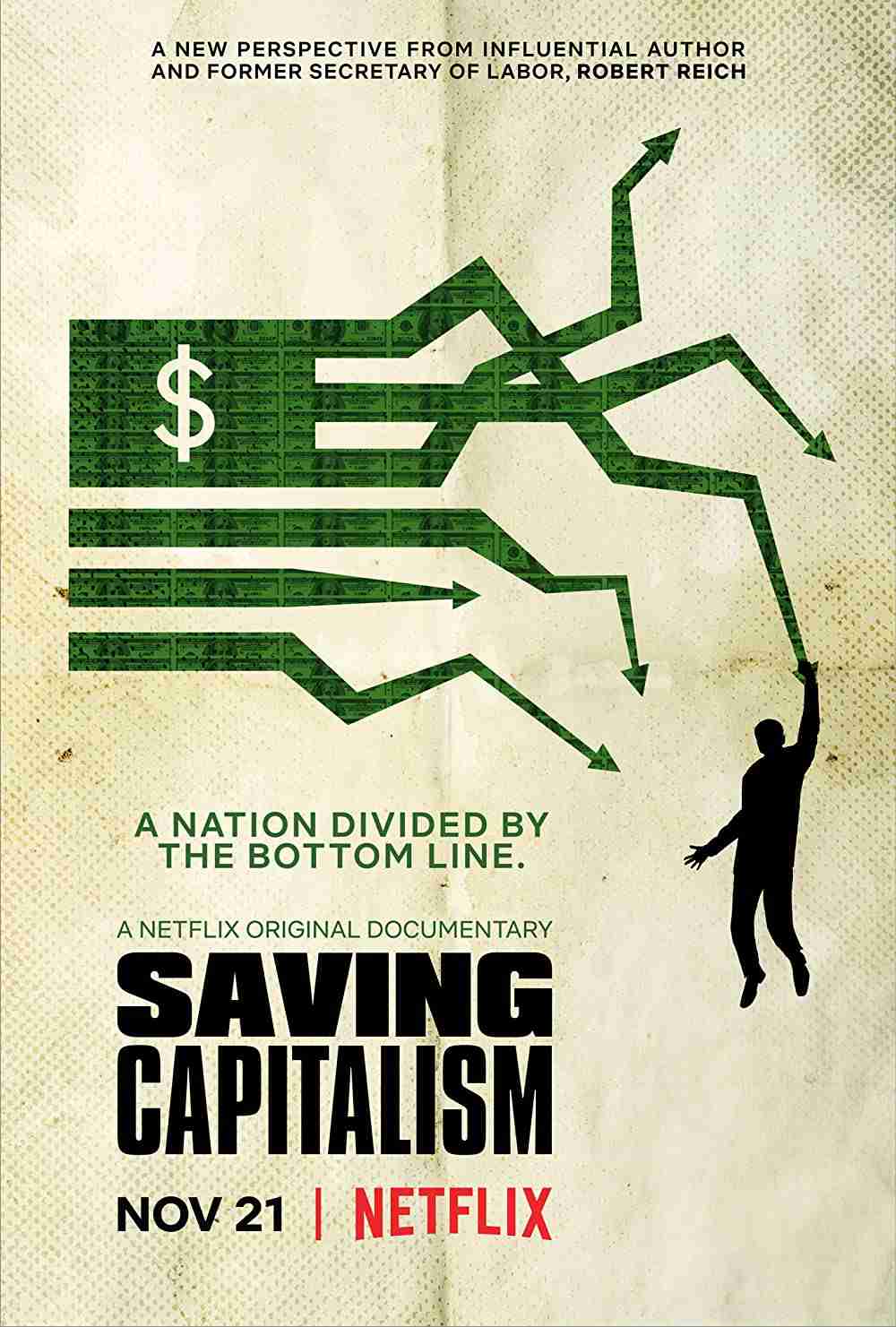 Released in 2017, Saving Capitalism is a documentary that follows former Secretary of Labor, Robert Reich. He talks about the frailties of the American economy and what stakeholders can do to “save capitalism.”

The film is based on the book by Robert Reich, “Saving Capitalism: For the Many, Not the Few.” 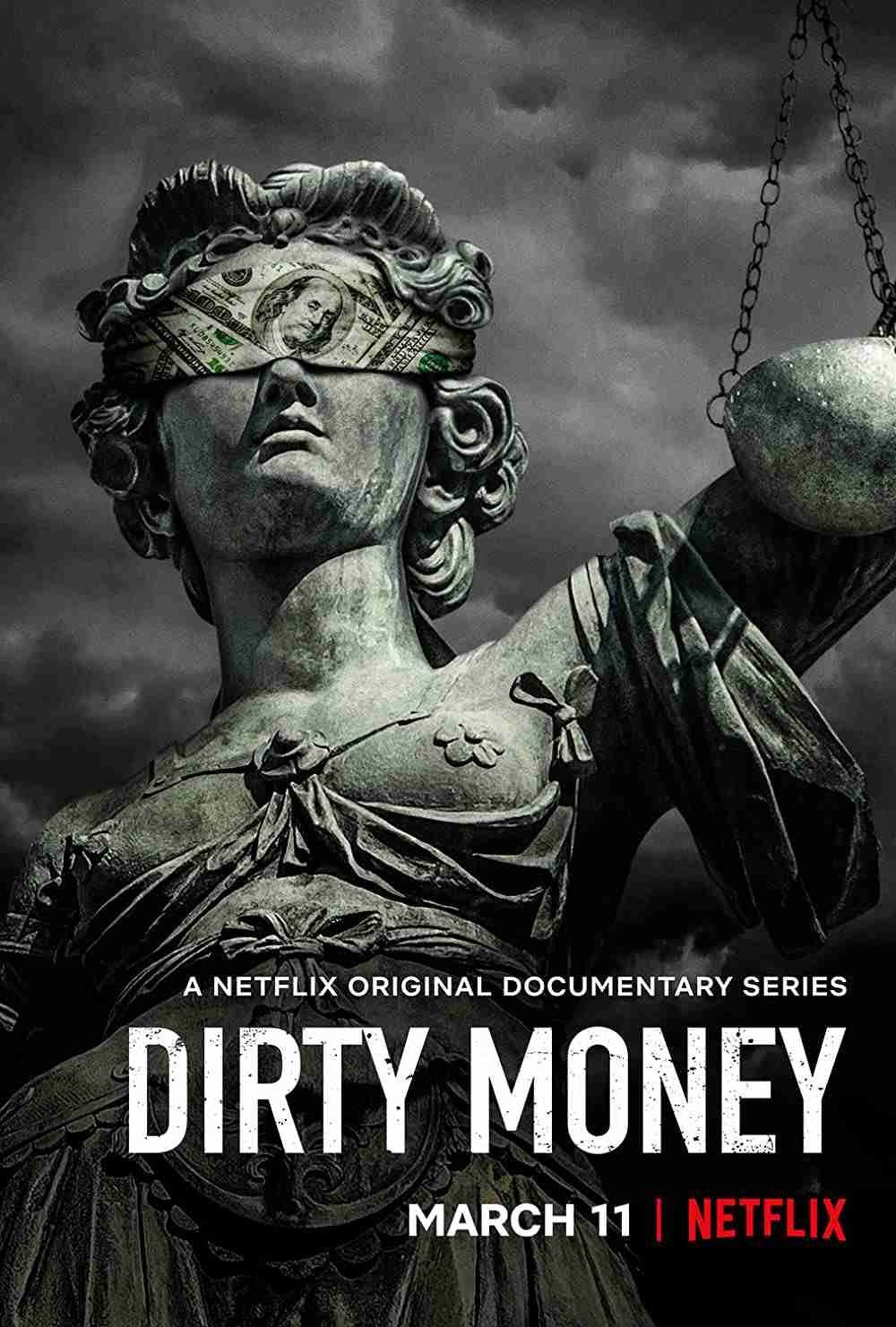 Dirty Money is an investigative series spread over 2 seasons and 11 episodes, covering several dark facets of money, such as drugs, cartels, payday, credit cards, banking scandals, and corruption. Each episode covers one of the facets in detail.

You can watch the series on Netflix. Released in 2009, this American documentary goes in-depth into the highs and lows of the American capitalist system, where the top 1% of the population holds 95% of the wealth. It delves into a system that masquerades as a champion of a free market economy but fosters greed and corruption. The movie is based on the non-fiction book “The Big Short: Inside the Doomsday Machine,” featuring a group of investors who discovered the irregularities in the US housing market.

While betting against the market, they understood the inherent corruption and scandal by the top US corporations that ultimately caused the 2008 economic crisis.

You can watch the movie on Amazon Prime, Youtube, and Apple TV. The 2010 documentary is based on a book by the same name, highlighting the factors that encourage people to take action. It showcases if businesses understand this motivation, they can sell anything to them.

You can watch this timeless documentary on Amazon Prime. Maxed Out ventures into the abusive practices followed by credit card companies to earn huge profits without considering the welfare of their customers. It is based on the book, “Maxed Out: Hard Times, Easy Credit and the Era of Predatory Lenders.”

Downfall: The Case Against Boeing (2022) The documentary delves into the history of Boeing and interviews several people who investigated the causes of frequent crashes of its Aircraft model Boeing 737 MAX.

It also showcases the subsequent investigation, showing how Boeing neglected the aircraft’s component failures to beat its competition. There are several movies and documentaries made on the life of Steve Jobs. All of them cover one or the other part of his life and business journey.

Some of my favorite documentaries on Steve Jobs are:

You can watch all these documentaries on Amazon Prime.

You can also watch the movie released in 2015 by the same name, starring Michael Fassbender. You can watch it on Amazon Prime, Google Play, and Apple TV. This 2016 film is based on the life of Ray Kroc, who went on to become the founder of the largest fast-food restaurant chain in the world, Mcdonald’s.

However, the movie slowly transitions to the greed and cunning maneuver of Ray, who kicked out the original founders of the restaurant and ultimately became the pseudo-founder of Mcdonald’s.

You can watch the movie on Amazon Prime and Apple TV. The 2010 movie highlights how Harry Markopolos and his team worked for 10 years to uncover Bernie Madoff’s Ponzi scheme that led to the scam of $18 billion ($60 billion if returns are included). The movie showcased how the US SEC ignored the evidence provided by Markopolos.

You can also watch the movie, Wizard of Lies, based on the life of Bernie Madoff, to understand the story from his angle as well. 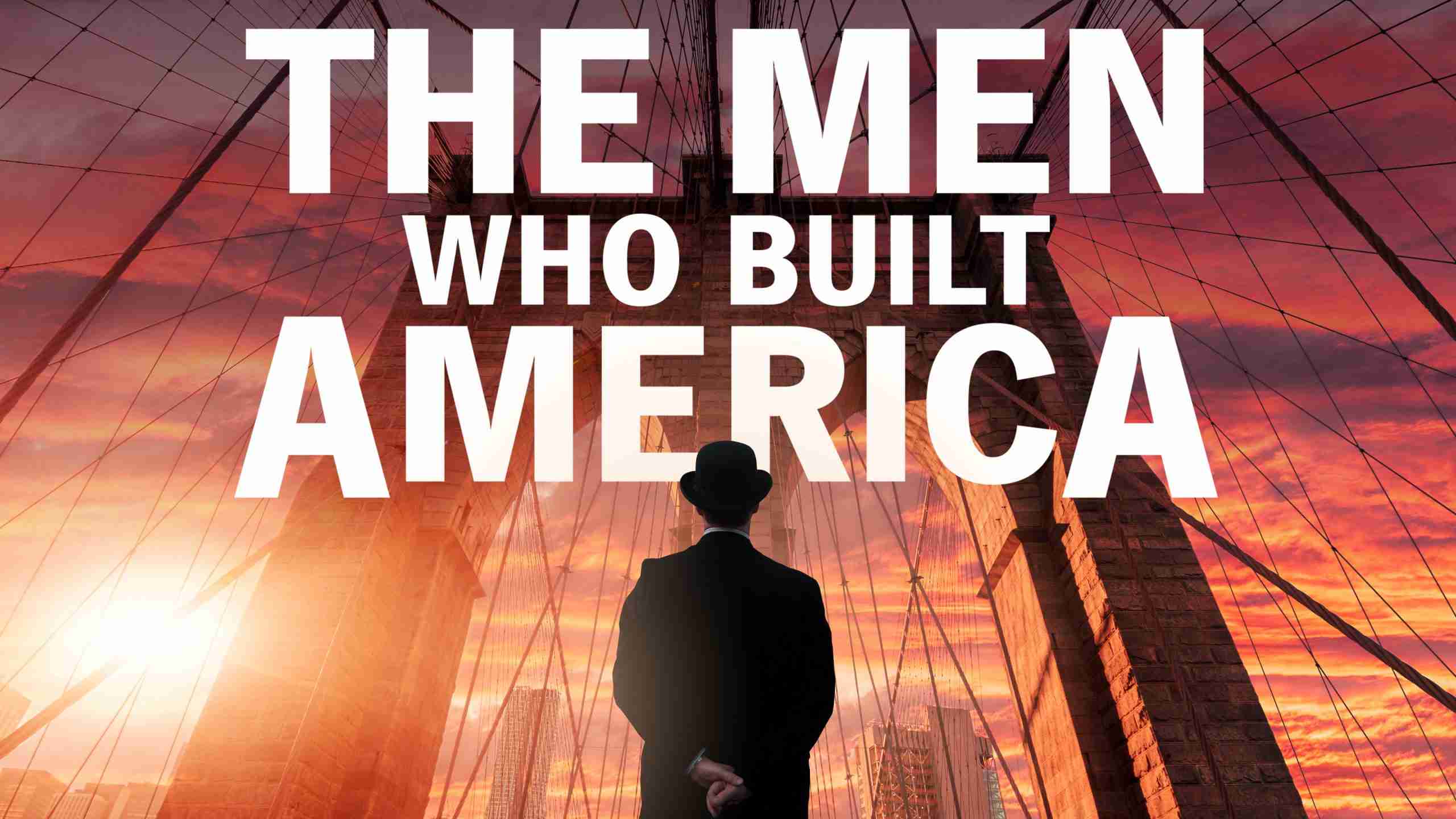 This 2012 biographical documentary series highlights the story of American businessmen who eventually led America to what it is today. This 8-episode series reflects on the lives of Rockefeller, Carnegie, JP Morgan, Vanderbilt, Astor, and Ford, who revolutionized the major industries of the USA.

You can watch the series on Hulu. This unique documentary, released in 2017, is based on the life of Hedge fund manager Bill Ackman who short-sells the stock of global nutritional giant Herbalife and tries to expose one of the biggest pyramid schemes in history.

The documentary also looks into the claims of Herbalife that Ackman has used illegal practices to manipulate the market and bankrupt the company. 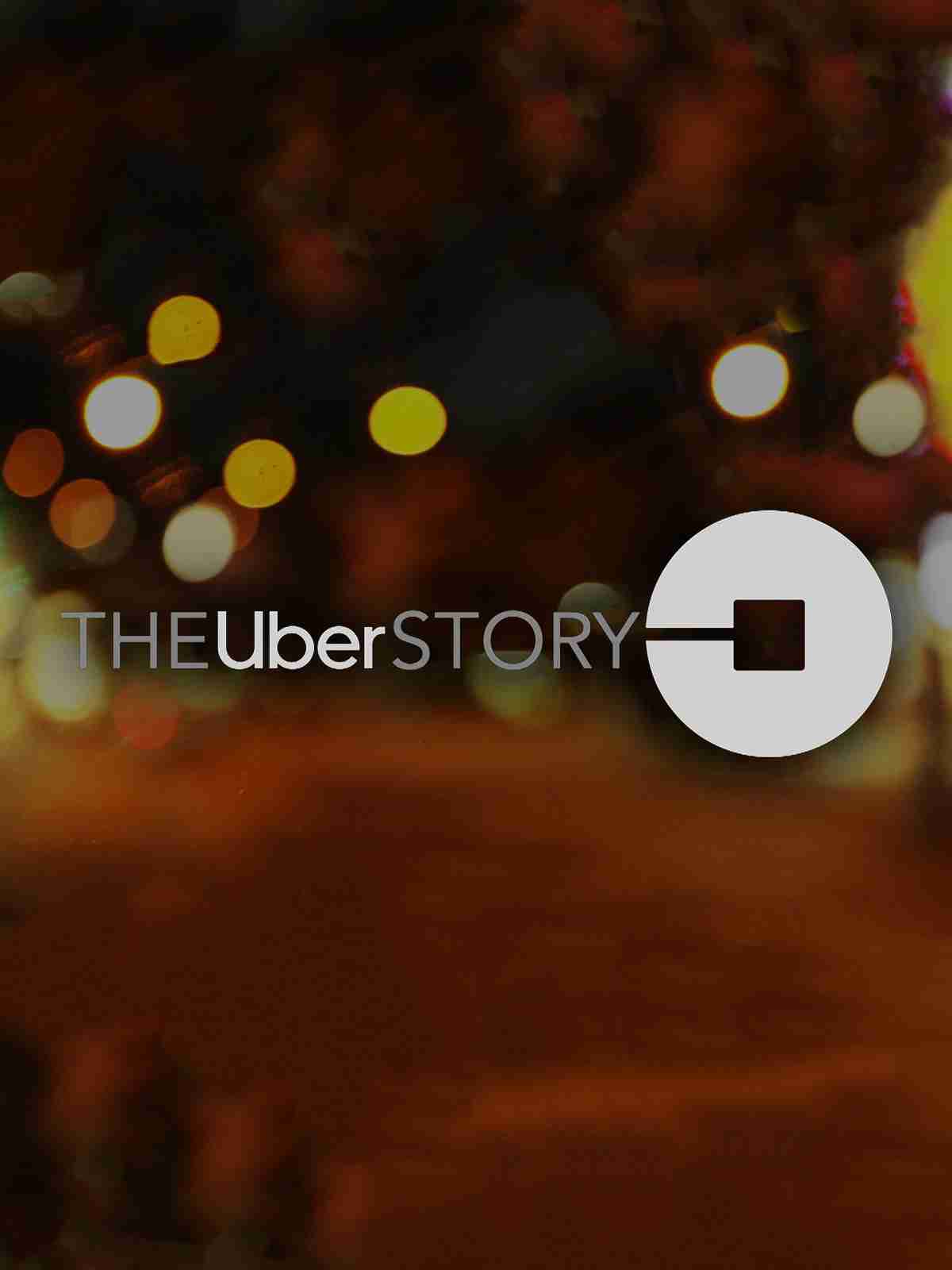 The Uber Story covers the rise and rise of Uber, a mega cab aggregator company, and shows how it became a common household name by disrupting the entire cab industry in just 9 years. The documentary further explores Uber’s unlawful and unethical practices to outsmart the regulators and kill its competitors.

You can access the Uber Story on Amazon Prime and Apple TV. Released in 2005, the documentary is based on a bestselling book by the same name, showcasing the collapse of Enron Corporation in 2001. It also unearths the scam done by the firm’s top executives that resulted in their criminal trial.

The 3 episode docu-series showcases the scam and fraud done by the biggest industrialists of India and how they tried to evade the law through corruption and fraud for years to follow. This investigative documentary further delves into the psychology of these tycoons and how their greed led to their downfall.

You can watch this docu-series on Netflix. Startup.com was released in 2001 after the dot com bubble crisis, highlighting how startups vanished as the bubble burst in 2000.

It follows a startup called govWorks.com and its founders, who took huge funding of $60 million but collapsed within 1 year as the Internet bubble burst. This became an example of how startups rise and fall and what lessons we should learn to avoid the ultimate mishap.

These top 20 finance documentaries/movies will give you an all-round idea of how businesses and economies rise and fall. Please let me know if I’ve missed any other documentary worth watching. How To Logically Value A Company Before IPO As An Investor 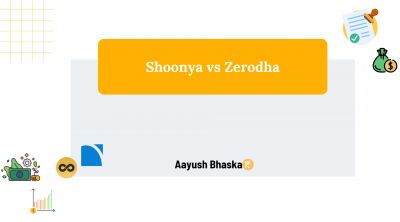 Shoonya vs Zerodha: What’s the Difference? How to Invest in Green Bonds in India How to Short-Sell Stocks in India Step By Step Guide to Buy Government Securities in India