Used by millions of people around the globe, it boasts the largest collection of celebrities, key opinion makers, business leaders & global athletes in terms of self-engagement.

Key to its uniqueness is its microblogging nature, which makes it far more expressive than any other social media platform out there.

More often than not, it throws up a surprise. The 5th of August 2022 was one such day, with the WazirX ownership controversy coming to the fore.

Crypto Twitter was swooning all over their screens as Binance, the largest Cryptocurrency exchange, founder & CEO, Changpeng Zhao, commonly referred to as CZ, dropped a bombshell.

Completely unprompted, he tweeted that Binance did not own WazirX, the pioneering Indian cryptocurrency exchange marred by an investigation into allegations of facilitating money laundering.

Now, this would not have been big news if not for the announcement of the acquisition that was heralded with much fanfare back in 2019 as the defining moment of India’s crypto and blockchain ambitions.

CZ’s own previous tweets on the subject post the acquisition, plus the integration touted within the Binance platform with WazirX, also made it a hard pill to swallow.

What turned this into a completely gargantuan affair was WazirX founder Nischal Shetty engaging with CZ in a public spat, challenging that Binance did indeed own it. The crux of their to and fro had just one simple giveaway – both of them didn’t want to own WazirX.

The intent of this post is to try and provide an analytical scoop as to what is the underlying issue. We will also try and conclude who’s speaking the truth and who isn’t and also try and indulge in how this issue could have been avoided in the first place. 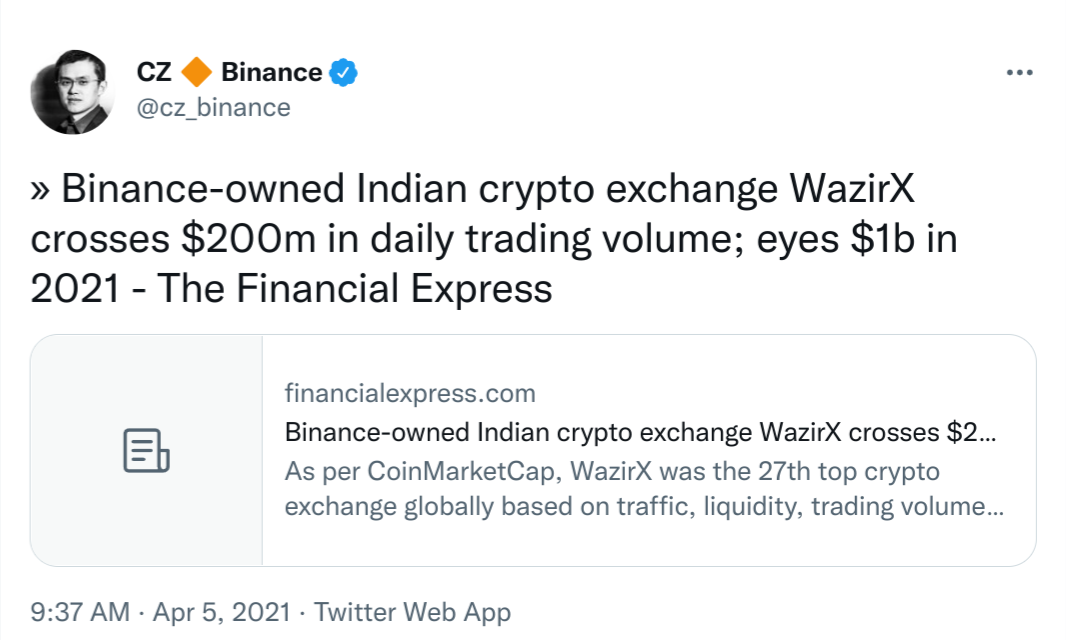 A good starting point is to jot down what we know:

From a purely legal standpoint, the argument that Binance does not own any equity in Zanmai Labs & / or never fully acquired the business is legitimate. However, the devil is always in the details and there are some points to ponder:

2.2. Everyone Is Telling The (Half) Truth

Notice the end. He says, “Don’t confuse Zanmai and WazirX”.

What if the acquisition was for the tech and not the Company?

This proves the point from Binance’s perspective that they never acquired any shares in Zanmai, but does not preclude the possibility that Binance acquired the technology, that is, the platform.

Why else would they have so much access to the technological aspects of the business?

If the above is true, Shetty is also telling the truth. Zanmai is simply the license holder to manage operations of the business in India that are not tech related.

As license holders, they cannot be held directly responsible for any errors they made as they are on account of their principal, that is, Binance. Binance can seek remedy for breach of duties but legally, Zanmai is just an agent.

3. Not Our Facts But Our Opinion

Given the publicly available information & our own analysis, we can conjecture that the following transpired. Please be advised that this is solely our opinion of maybe how events unfolded & not a statement of facts.

Binance entered into an acquisition agreement for Zanmai Labs which, like any standard agreement, had certain conditions precedent to be considered executed.

Both parties, in good faith, began working on these conditions precedent which probably included:

At some point, the conditions precedent may have complied & the founders asked for the name of the Binance entity to which shares were to be transferred.

After all, Binance operates in regulated markets under its own name with its own on-ground presence, This, as Shetty challenges, was never provided. We can only speculate what would be the reason, including but not limited to:

Volumes on centralized exchanges in India have taken a massive hit starting the 1st of July 2022 following the imposition of a 1% Tax to be paid by sellers on the value of the sale.

As trading volume directly impacts exchanges’ earnings in the form of trading fees, market factors are aligned against the economics of operating centralized exchanges in India.

Sensing regulatory heat and may be driven by market factors, Binance thought it would be best to withdraw from the deal altogether & write off WazirX as an investment.

While we leave the issue of why no one wants to own WazirX to our own individual interpretations, it is necessary to talk about how this impacts the industry.

The fallout from all of this is the simple fact that deal flow in Crypto should have some form of regulation. This regulation does not have to be the Government type. A solution could be developed for on-chain verification as to whether a deal announced does eventually consummate or not.

This is important from the aspect of protecting users. Imagine the countless people who used WazirX for being a Binance-owned entity. They have been lied to.

Similarly, the countless people who bought the WazirX coin for being a Binance-owned entity. Again, they have been lied to.

Unless the Crypto industry takes it upon itself to self-regulate, the user will not be protected. Such lack of protection will ultimately lead to wider calls for Government regulation. How to Withdraw Dogecoin (DOGE) from WazirX How to Withdraw ETH and BTC from WazirX How to Buy & Withdraw Solana (SOL) From Wazirx